by Dr. Maureen
in Dog Nutrition, Dogs
6
SHARES
7.4k
VIEWS
Share on FacebookShare on Twitter
This post contains affiliate links, and we will be compensated if you make a purchase after clicking on our links. Learn more.

Seizures can be defined as involuntary muscle movements or convulsions resulting from overstimulation of the nervous system and brain activity. Seizures are common with a majority having no known etiology or are genetic.

The most common cause of seizures in dogs is epilepsy commonly known as seizure disorders. Epilepsy occurs when a dog experiences two or more unprovoked seizures in a period of one year.

Management of seizures has a lot to do with the use of antiepileptic drugs (AEDs) coupled with good nutrition. Getting the best dog food for seizures goes along way in controlling the frequency of seizures and managing the side effects that come with the use of AEDs.

Epilepsy can greatly reduce the quality of life of a dog. It can also be a source of worry and a financial burden to caregivers. The use of supplements and a good diet is ideal.

What Causes Seizures in dogs?

A seizure occurs as a result of abnormal activity in the brain leading to involuntary muscle movements. There many causes of seizures in dogs. Among these include:

These occur due as a result of abnormalities in the genetic makeup of dogs. They are easily passed from generation to generation.

Seizures can be classified as:

Foods And Ingredients To Avoid

Research has revealed an association between nutrition and frequency of seizures. Certain ingredients or foods often aggravate the occurrence of seizures and should be avoided.

Pet owners should always go through the ingredients when purchasing commercial dog food or better yet try to prepare their own meals or buy dog food specifically recommended by their veterinarian. Common foods to avoid include:

a. Gluten diets: Gluten is not only a common food allergen it is also a cause of may autoimmune diseases. Gluten diets have also been found to stimulate opioid receptors in the brain increasing the likelihood of a seizure occurring. Gluten is commonly found in commercial foods in the form of wheat, soy, oats, and rye.

b. Grains: This is also common in commercial dog food. Grains provide very little nutrition. They are also common allergens, lead to digestive problems and affect organs such as the liver. They also cause autoimmune diseases and can lead to insulin intolerance and diabetes.

c. Carbohydrates: The most common source of carbohydrates in commercial dog foods is grains. Simple carbohydrates e.g. grains are the most harmful compared to complex carbohydrates. They are easily broken down and have a high glycemic index.

Natural Remedies for seizures in dogs

1. Dietary changes: As discussed above diet is a great contributor to the occurrence and frequency of seizures. Avoid gluten, simple carbohydrates, and grains. Some foods can also be toxic and cause seizures.

These include Bell peppers, chocolate, grapes, onions, etc. The red dye 40 commonly found in commercial dog foods have been shown to cause seizures.

They also help reduce the blood concentration of triglycerides which is a common side effect of the use of Phenobarbital, a common AED.

3. Homeopathic oils: These are administered when a dog is having a seizure. These natural oils are applied directly on the skin or gums of a seizing dog ending the seizure and pain in minutes. Such include belladonna, aconite, and choline.

4. Acupressure: This helps to ease animal pressure during a seizure by applying pressure on pressure points such as the base of a dog’s nose or by pressing above their upper lip.

5. Melatonin: This a naturally occurring hormone responsible for sleep. It is administered to prevent the occurrence of seizures at night.

6. Honey: Seizures resulting from low blood sugar can be prevented by giving 2 teaspoons of honey daily.

7. Ice packs: rubbing an ice park along the back of a dog can help stop seizures caused by hyperthermia.

Common dog foods, supplements, and treats suitable for dogs suffering from seizures include the following:

This is a dry food prescription diet specifically formulated for dogs with neurological conditions. It is made from medium-chain triglycerides and high-quality ingredients with high nutritive benefits.

The medium-chain triglycerides (MCT) are easily digestible putting less stress on the liver which is greatly affected since it helps in the metabolism of antiepileptic drugs. Omega 3 fatty acids also help to increase immunity and reduce the high number of blood triglycerides, a side effect of using phenobarbitol.

DHA and EPA help in brain development and have anti-inflammatory properties that help protect nerves. Contains antioxidants that protect neurological tissue from damage by free radicals.

This pet food is specifically formulated for a dog with neurological and cognitive disorders. It contains ingredients that maintain the integrity of the neurological conditions side effects of phenobarbital.

This is a prescription veterinary diet dry food for adult dogs. It’s formulated to give a complete and balanced diet and rich in easily digestible protein.

This is a dry dog food specifically made for adult small dogs between 9 – 22 lbs from 10 months to 8 years of age.

DHA and EPA are essential for normal brain function as well as the regeneration of neurological tissue. High protein helps in the repair and growth of muscle and other tissues in the body including nervous tissue.

The digestible proteins are essential for the growth and repair of lean muscles. L- carnitine helps in fat metabolism as AEDs cause an increase in blood triglyceride levels. Taurine helps to reduce the frequency of seizures.

This food not only works for epileptic dogs but also offers additional benefits that affect most large breed dogs concurrently.

This dry dog food is formulated for dogs 7 years and above. It made from chicken.

Glucosamine has anti-inflammatory properties which help prevent and relieve arthritic symptoms The live probiotics help in digestion as senior dogs are prone to bowel disturbances.

This diet helps to reduce triglyceride levels which predispose them to pancreatitis, heart diseases, and diabetes. DHA, EPA, and Omega 3 fatty acids help to reduce inflammation of the nervous tissue while glucosamine helps to relieve arthritis.

This is a dry dog food containing salmon as the first ingredient.

Salmon is a rich source of easily digestible quality proteins essential frot the growth and repair of lean muscle. It also contains Omega 3 fatty acids that help protect the nervous system from inflammation.

It also contains fruits and vegetables a rich source of fiber and antioxidants. Vitamin and chelated minerals help in the absorption of nutrients in the body.

This dog food offers a rich source of antioxidants and essential fatty acids that help in the development of the brain as well as protect the nervous system from inflammation and cell injury. It also lacks grains and gluten which are known to stimulate the development of seizures.

These are chewable treats made from pure fish oil rich in Omega 3 fatty acids.

Omega 3, 6, and 9 fatty acids are powerful antioxidants and have anti-inflammatory properties. They help strengthen the immune system which helps manage and control seizures. They also aid in brain development as well as promote joint health. They help to relieve itchy skin leaving a shiny coat.

Omega 3, 6, and 9 fatty acids are essential in brain development as well as in strengthening the immune system which helps reduce the frequency of seizures. It also promotes the health of the nervous tissue.

Essential fatty acids also promote healthy growth of the skin and give dogs a shiny coat. 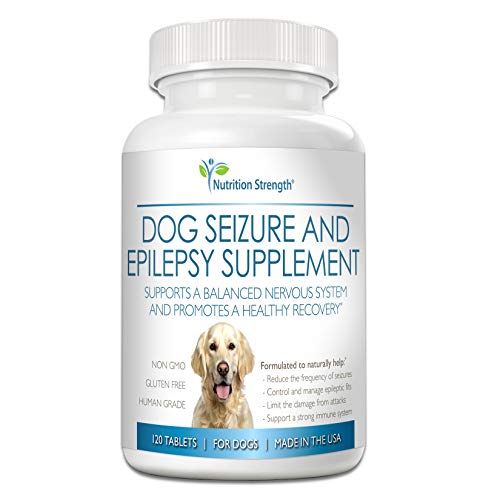 These are dog supplements that help to rebalance and fortify your dog’s immune and nervous system to better them control and manage seizures.

These supplements help to reduce the frequency of epileptic fits by strengthening their immune system. Organic Passion Flower and L-Tryptophan helps to balance your dog’s behavior and limit nervous outbursts.

Valerian Root helps to limit damage from attacks by reducing scratching and restlessness. Chamomile, on the other hand, helps to relax your pet and relieve stress which can lead to unrestrained jumping, biting, and barking.

These dog supplements help to strengthen the dog’s immune system, therefore, making it less likely for your dog to suffer from epileptic fits and seizures. 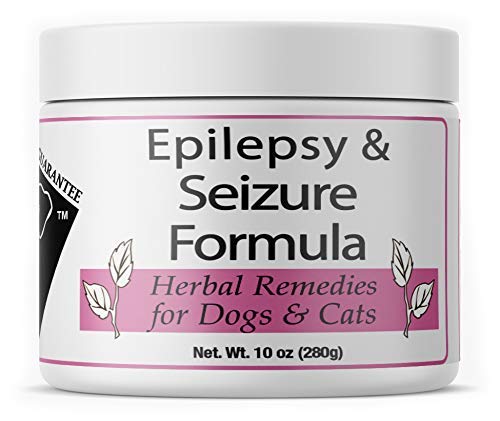 These supplements help to calm the dog during a seizure to help lessen the effects of nervous conditions.

Valerian root contained in the supplements has natural anticonvulsant and antispasmodic properties which have a calming effect on dogs during seizures. Blue Vervain, on the other hand, is a natural tranquilizer that has a calming effect on over-excited nerves.

Passionflower is a powerful sleeping aid which helps to lessen the effects of nervous conditions.

This supplement has anticonvulsant and antispasmodic properties that help to calm a dog when experiencing an epileptic fit. 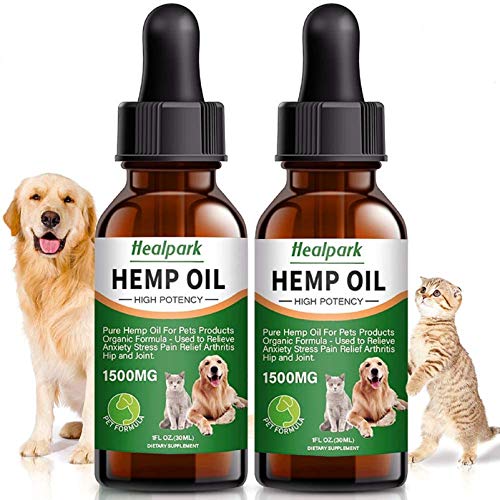 These supplements are made from organic hemp seeds of which their oil is used as a pain reliever and a tranquilizer.

Hemp seed oil extract is known for its calming effects making it popular in the treatment of seizures, aggressive behavior, separation anxiety, travel issues, and barking.

Hemp oil is a natural oil that is used for pain relief in joint degenerative diseases. It is also used for its calming effects in the treatment of seizures, anxiety, and aggression.

Diets formulated specifically for dogs with epilepsy are not yet in the market due to the fact that epilepsy has many causes. What veterinarians recommend is to offer diets that help relieve the side effects of medications as well as promote healthy nervous tissue and regeneration of the same.

It’s also wise for pet owners to look for foods that contain supplements such as DHA, EPA, omega3 fatty acids, fish oil capsules, Vitamin D3, thiamine, taurine, etc.  It is also important to keep your dog at a steady weight since AEDs are shown to cause an increase in appetite.

Low-fat diets or protein-rich diets are therefore advised. Anecdotal theories also suggest that ketogenic diets can help reduce seizures but no studies have proved this yet. It is therefore wise to contact your veterinarian before putting your dog on a keto diet.

Here's our reviews of the best dog foods for seizures to help you find the best diet for your dog.

We collect information from many stores for best price available

How to Hypnotize a Dog

How to Clean Your Dog’s Teeth

Why Do Dogs Put Their Ears Back?

We've reviewed the best dog toothpaste on the market today to $2.84

Check out our review of the best dog harness on the $9.99

Here are the ratings of the best 30 dog collars currently $7.99